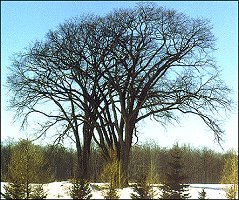 The elms belong to a temperate family and have about 15 genera with over 150 species of trees and shrubs.  A few species are tropical.  The United States has five genera but only two contain common tree species.  Both of these genera (Ulmus and Celtis) occur in the U.P.  American elm and slippery elm are the most common.  Rock elm and hackberry are rare.  Elm fruits are round samaras which ripen in the spring.  Hackberry has berry-like fruits that ripen in the fall.  The twigs of elms and hackberries have a zig-zag arrangement.  The three elms are similar in appearance. leaves and twigs are variable and sometimes difficult to distinguish.

LEAVES are simple, 4-6 inches long, double-toothed, with an unequal leaf base.  Samaras are 1/2 inch long with a distinct notch and fuzzy margin.  TWIGS are slender and brown, younger TWIGS can be somewhat fuzzy.  Terminal BUDS are angled from the TWIG at about 45 degrees. The BARK is roughly furrowed with distinct red & white layers seen in cross-section.  American elm has one of the most easily recognized tree silhouettes.  BRANCHES fork at sharp or V-shaped angles pointing upward then gradually arching to the outside of the crown, giving the tree a very graceful, vase-like appearance.  American elm usually grows in rich, deep SOILS, often in flood-plains and sometimes in association with northern hardwoods on better sites.  Unfortunately, the American elm has fallen victim to the Dutch elm disease (a fungus named Ceratocystis ulmi, related to oak wilt, C. fagacearum).  Once a major component of our hardwood forests and a common urban tree, almost all trees larger than 8 inches in diameter have been killed.  Common pests: loopers, cankerworms, mourning cloak, tussock moths, carpenter worm, oak twig pruner, Dutch elm disease.

LEAVES are almost the same as American elm, but are much scratchier due to high silica content in the leaf.  Samaras are a bit larger than American elm but without the distinct notch and fuzzy margin. The BARK is similar, too, except the cross-section lacks the white or cream-colored layer. The INNER BARK has a faint licorice smell and becomes very slimy when chewed, thus the name "slippery" elm.  BRANCHES form U-shaped crotches.  TWIGS are similar to American elm but the terminal buds are a little fatter and hairier.  Slippery elm is almost always found along streams and on floodplains.  It is commonly found with red maple, silver maple, and black ash.  Like the American elm, slippery elm is also susceptible to the Dutch elm disease.  Common pests: loopers, cankerworms, mourning cloak, tussock moths, carpenter worm, oak twig pruner, Dutch elm disease.

LEAVES are simple, 2-4 inches long, double-toothed, with an unequal leaf base.  The hairless samaras are twice as wide at the end than at the base.  The trunk BARK on larger trees is deeply furrowed with cross-sectional layers of light and dark.  On older TWIGS, corky ridges form.  Younger TWIGS are without ridges and without fuzz.  Buds are pointed and about twice as long as wide.  BRANCHING does not have the V-shaped or U-shaped characteristic of other elms.  The tree is rare in the U.P.  Further south, it occurs with upland hardwoods on richer soils.  Common pests: loopers, cankerworms, mourning cloak, tussock moths, carpenter worm, oak twig pruner, Dutch elm disease.

LEAVES 2-4 inches long, coarsely toothed (strongly pointed toward leaf tip), leaf bases mostly unequal, surfaces are smooth (not scratchy like American and slippery elm).  Blue, berry-like FRUITS ripen in the fall. Trunk bark and twigs have CORKY RIDGES.  The TWIGS have a zig-zag pattern and sometimes finely chambered piths at the nodes.  It's a small tree that usually grows along river courses but is rare in the U.P.  Common pests: leaf galls, tussock moths.