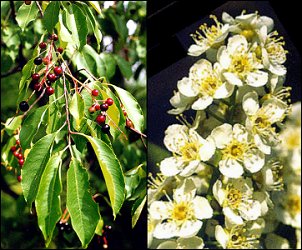 The rose family is a large group with about 120 genera and 3300 species.  It is primarily a temperate climate family but is scattered around the world.  Most the species are not trees but some are very important in the fruit industry, such as apples, cherries, peaches, plums, and others.  However, in terms of forestry only black cherry has significance.  There are many shrubs that are family members including hawthorne, juneberry, mountain ash, wild rose, blackberries, raspberries, and gooseberries.  The particular page will cover the member of the genus Prunus.  About 25 species occur in the USA, of which 18 are tree size.  All the U.P. cherries have simple leaves with finely-toothed margins.  They all produce edible fruits and all have a distinct bitter taste to the twigs.  Flowers are white.  Only black cherry commonly grows to tree size and form, although it occurs as a shrub on poorer sites.  On better sites, the other cherries sometimes become small trees.   Cherries and cherry-like shrubs can often be found along roads under powerlines.  Some cherry-eating birds commonly roost on powerlines and drop the pits below.

LEAVES of black cherry are 2-6 inches long, about an inch to inch-and-a-half wide, with a pointed tip.  Most of the season, rusty-colored FUZZ can be found on the back of the leaf, along the mid-vein, especially near the leaf stem.  The teeth along the leaf margin are somewhat incurved. White FLOWERS bloom in June after leaf-out.  The CHERRIES turn from dark red to dark purple in September, later than the similar choke CHERRIES.  FLOWERS and CHERRIES are arranged in a "raceme" which is a central stem with numerous, short side stems holding one berry each.  The BARK starts out smooth and dark gray but soon develops black scales that resemble burnt potato chips.  The TWIGS are slender, dark gray, with a bitter taste.  A disease called "black knot" often infects the TWIGS.  It appears as a large, black swelling with a "soot-like" covering.  Terminal BUDS are a little longer than wide and sharp-tipped.  The TRUNK is often sweepy but on good sites with the proper stand history can grow nice log sizes and shapes.  Black cherry often occurs on sites that have been severely disturbed within the last several decades.  It often grows in ASSOCIATION with oak, aspen, and a number of brush species.  It is intolerant of shade and soon dies out in stands of longer-lived species.  Common pests: eastern tent caterpillar, leafminers, cankerworms, tussock moths, ugly nest caterpillar, walkingsticks, black knot, frost cracking.

LEAVES are similar to black cherry but usually a bit more elongated and without the rusty fuzz.  The teeth along the leaf margin are somewhat incurved. The ripe CHERRIES are bright red and arranged in clusters.  They appear in August and are quite tart to the taste.  The BARK is a bronzy-purple with horizontal pink-salmon bands about an inch long.  The terminal BUDS occur in clusters of 2 or 3 rounded BUDS.  TWIGS are usually quite slender and dark gray in color.  Pin cherry readily invades old fields and burns.  It will often appear as brush and seldom reaches tree size. Common pests: eastern tent caterpillar, leafminers, cankerworms, tussock moths, ugly nest caterpillar, walkingsticks, black knot, frost cracking.

The LEAVES are 2-4 inches long and usually widest closer to the tip than to the base.  The teeth along the leaf margin are not incurved, which can separate choke cherry from the other two CHERRIES.  The FLOWERS and fruits arranged in "racemes", very similar to black cherry.  However, choke cherry often denser racemes and more CHERRIES.  The crown is often full with white FLOWERS in the spring, just after leaf-out.  The reddish CHERRIES ripen in August to a dark purple or black, before black cherry.  The BARK is medium to dark gray and has raised, warty spots. The TWIGS are medium to dark gray with terminal BUDS 2-3 times their width and pointed.  The TWIGS are most bitter of all the CHERRIES and cherry-like shrubs.  Chokecherry is almost always a SHRUB and is more common than pin cherry.  Rabbits and deer generally shy away from chokecherry, so it may locally very abundant, especially in the southern U.P.  Common pests: eastern tent caterpillar, leafminers, cankerworms, tussock moths, ugly nest caterpillar, walkingsticks, black knot, frost cracking.